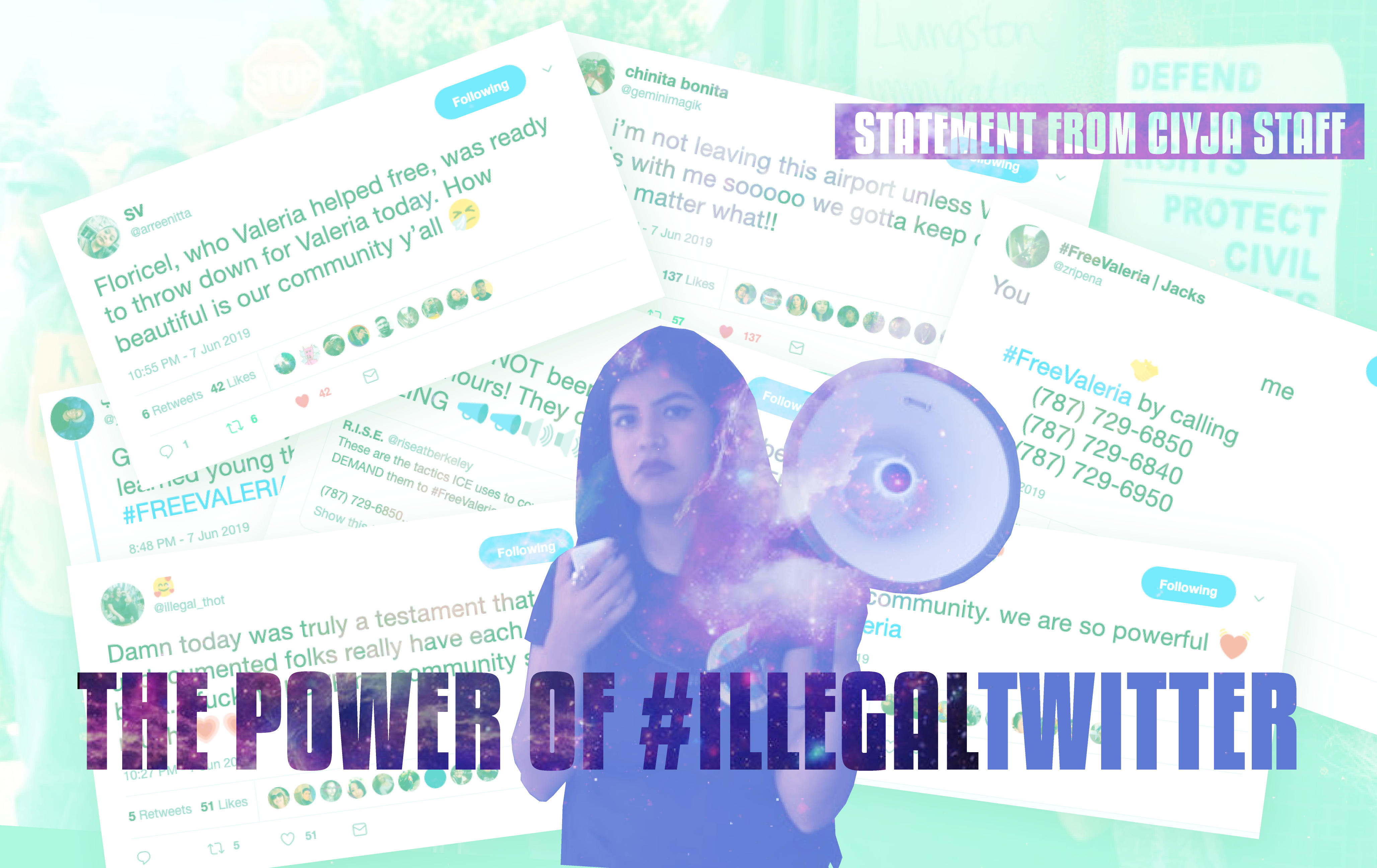 On June 9th, Valeria Suarez–an undocumented and queer organizer–was detained by Customs and Border Patrol (CBP) on her way home from Puerto Rico, where she celebrated having recently graduated. Like many undocumented folks who travel within the United States, both with or without DACA, she traveled with her passport from her country of origin.

Upon returning home, TSA Agents singled out Valeria for using her Peruvian passport and reported her to Customs and Border Patrol. It is important to note that TSA has no requirement to refer people to CBP and clearly targeted Valeria for being an immigrant. What was supposed to be a simple domestic flight resulted in the 12-hour detention of Valeria after they noted she had overstayed her visa. The agent had the power to let Valeria board her plane without notifying CBP, and safely travel home, but instead decided to profile her and intervene in her celebratory trip.

As she was being transferred over to CBP, Valeria contacted CIYJA and within minutes we were able to mobilize our community. Hundreds of calls generated within hours began to flood the CBP office, so much so that TSA could no longer contact CBP to detain another individual. The rally call: #FreeValeria began trending on Twitter nationally.

This became the leverage we needed to pressure them to release her that day, before transferring her over to an ICE detention facility in Florida. Every single call, tweet, and share played a pivotal role in ensuring CBP knew that they would not be able to get away with their usual shady practices when apprehending immigrants.

Valeria was not new to these sorts of campaigns, having organized them to free others before (i.e. #FreeFloricel, #FreeLuis). Because of this, she knew she had the right to remain silent while detained, and knew to ask to call an attorney. She also knew not to sign what is known as a Voluntary Departure Form, which would have initiated her deportation proceedings. Valeria’s knowledge of her rights ensured that we had the opportunity to free her within 12 hours.

As such, we would like to remind our undocumented youth to continue informing their loved ones on the protections granted to them by both state and federal laws. To remind them that though we are undocumented, we have certain constitutional rights. ICE depends on fear to keep immigrants quiet when facing injustices at their hands, so spread power, not panic.

Many of our accomplices joined in our fight, and trusted the leadership of undocumented folks. They didn’t claim to speak on behalf of our community, but instead allowed the people most impacted by the violence of global displacement to guide the strategy.

Though Valeria still has a long legal battle ahead of her, she fights it outside of detention thanks to all those who engaged in her campaign. She fights it with her family, with her loved ones, and with all of those who are willing to fight alongside her moving forward.

We hope you can join us in fighting alongside one of the fiercest organizers we know, who continuously puts her body on the line for the liberation of the most criminalized by the state.

CIYJA STAFF is comprised of immigrant youth across the state of California, fighting for the liberation of all immigrant communities.

Press Release: Kern County “Coming Out of The Shadows”

This evening, a group of immigrant youth under the name Kern County Promotoras will be organizing a “Coming Out of the Shadows” event aimed at highlighting immigrant stories and experiences to expose the injustices against immigrant communities in Kern County.