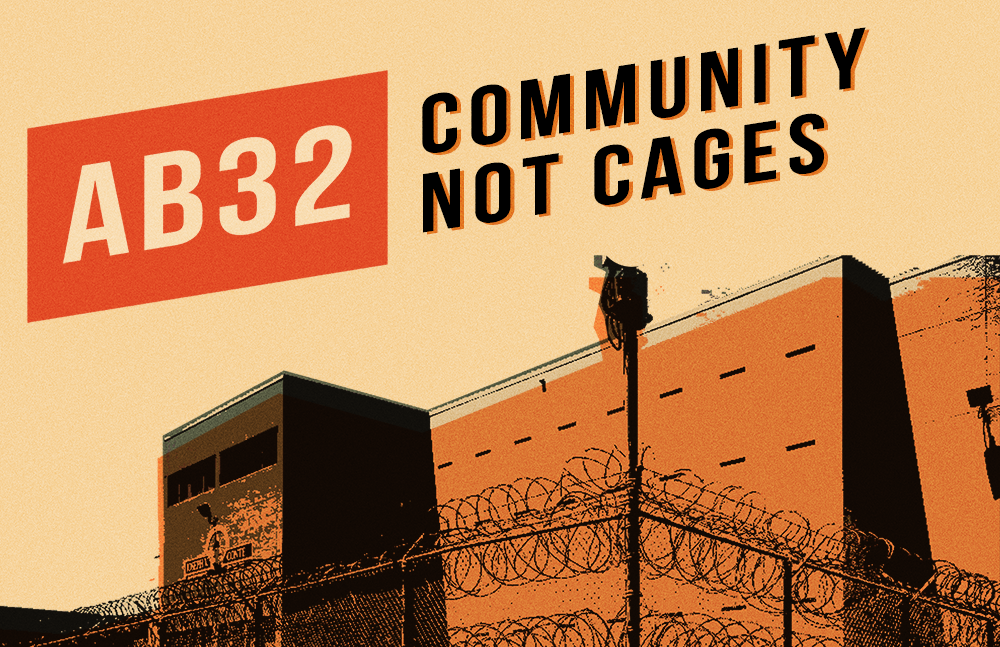 This morning, California Governor Newsom and Attorney General Xavier Becerra challenged the Trump on their racist public charge policy, in another effort in California’s so called “resistance” against the administration. As an undocumented immigrant that calls California home I feel like much more is needed from my state to protect my community.

With a rise in white supremacist violence targeting communities of color, the time is ripe for us to direct our outrage towards efforts to unravel the very structure that has allowed white supremacy to thrive in the United States to this very day: mass incarceration.

Though there is an illusion to the general public that both the criminal justice and immigration systems are broken, they have in fact been functioning as designed. Namely, to criminalize and incarcerate poor people of color. To make matters worse, private companies have built a business model around this racialized system, adding industrial fuel to an already detrimental operation.

Without acknowledging that these money-driven systems have been working towards the advancement of a white supremacist agenda, people of color will continue to be subject to state-sponsored and other forms of extremist violence. Failing to recognize this is what makes even well-meaning politicians fail to get at the core of the problem of mass incarceration and the ever-escalating mass detention of migrants.

Earlier this month, Governor Newsom met with law enforcement to discuss public safety, instead of consulting directly with advocates who have been building real public safety solutions with low-income communities of color, those most vulnerable to violence. Leaving out those perspectives is exactly why California still holds such high incarceration rates even at a global context, surpassing countries such as the United Kingdom, France, and Canada. This also explains why California holds the second highest immigration detention population in the nation.

To an extent, the state claiming to be the resistance against Trump is keeping the tools he’s using against our communities thriving.

There are several reasons why this is taking place, including the lack of stern accountability and oversight over private prisons in California. Despite a 2-year investigation into immigration detention centers in the state (majority run by a private company named GEO Group), California Attorney General Xavier Becerra’s many investigations concluded much of the same information local organizers and advocacy groups had already unveiled: facilities are inadequately kept and not up to basic standards.

This is allowed to happen because elected representatives are heavily influenced by the California Sheriff’s Association, notorious for having strategy meetings with the Trump administration. During his term, Governor Brown failed to adequately address California’s prison pipeline by continuously being guided by the Sheriff’s Association, who has been proactively working to end criminal justice and immigration reform efforts throughout the state.

The truth is that the solutions to these problems will require nuance that state officials cannot resolve by simply having conversations with one another. They need the guidance of those of us who work and build better visions of the future with those most directly impacted by mass incarceration.

This is why despite grassroots advocacy, recorded cases of abuse, and even thorough reports, leadership in California is still falling short in terms of putting bold decarceration solutions forward that will actually benefit Californians. Governor Brown’s lack of criminal justice reforms dated back to his years as Attorney General in the 70’s, and we now urge Governor Newsom to turn the tide and take bold policy action against the radical hate plaguing the nation.

With such an important federal election ahead of us, California leadership cannot step backwards on our push for a more just world. The only way this can be accomplished is by no longer allowing the California Sheriff’s Association to so heavily influence the bold policies we put forward. Especially given the fact that the current president of the Association, Sheriff Livingston, is under fire from local Contra Costa residents for unexplained deaths at the county’s jails and collaboration aimed at aiding direct transfers from local jails to ICE despite sanctuary policies.

California’s trajectory can no longer fall in line with supporting law enforcement’s questionably far-Right agenda, which continues to push for no accountability. It must instead invest in the communities that make up California’s population to seek solutions. To fail to do so will ensure threats to communities of color continue to flourish, and make California vulnerable to Trump’s racist rhetoric.

In order for California lawmakers to truly lead a fight against Trump, they must recognize that they are not the resistance, those of us organizing on the ground are. If they really seek to resist a fascist agenda, they must stop taking the direction of facist organizations. As Trump’s reelection campaign continues to spread his violent hate-filled propaganda that will continue to incite white supremacist terrorism, the California legislature must meet him with bold policy.

This legislative cycle is an opportunity for California to do just that; to truly put its values into action, taking a proactive approach against the administration’s violent rhetoric targeting the very communities that make us such a vibrant state. How California defends its values depends on the leadership that Governor Newsom will show in getting guidance from those us at the forefront of this resistance.

It will also depend on how bold the legislative branch of California is when protecting efforts like ending prison enhancement through SB136, or passing and signing AB32 to completely divest California from private companies who profit off of the incarceration, detention, and deportation of our communities.

Furthermore, we will need Attorney General Bracera to set strict oversight over law enforcement that holds them accountable for violating the state laws meant to protect our communities. This will ensure that the gang regulations being negotiated do not give ammunition for law enforcement to further criminalize communities of color using databases.

The hate-filled world we find ourselves in now did not come out of nowhere; communities of color have been fighting against this apparatus for decades now. However, Trump has escalated it to the openness by which it operates now, and we need to meet that with bold strides against the systems that help propagate it. It is the responsibility of California policymakers to push forth policies that highlight our vision of the future.

Leave the resistance that will create an environment for these policies to us.

#Health4All: Now Is Not the Time to Scapegoat Undocumented Immigrants